Returning to theatre for the first time this year, find out about our ongoing safety measures

10 years on from the reopening of City Varieties Music Hall after its restoration work, we look back at the two year regeneration project.

10 years ago, on the 17 September 2011, City Varieties Music Hall re-opened its doors after a two year regeneration project. To celebrate a decade since the remarkable restoration of the UK’s longest running music hall, we’re looking back at the £9.925 million refurbishment process.

The City Varieties regeneration project was funded by Leeds City Council and the Heritage Lottery Fund with the remainder coming from our own fundraising efforts, plus significant sums from the Friends of the City Varieties and The Monument Trust.

The project was widely supported by many famous faces, including Paul Merton, Moira Stewart and Nicholas Parsons, and legendary funny man and friend of the City Varieties Ken Dodd, who was chosen as both the closing act before the 2009 regeneration project began and the reopening act in 2011.

During the refurbishment, a considerable amount of work was carried out with the following key changes:

Backstage areas were completely demolished and then rebuilt. Six modern dressing rooms, an access lift and a newly fitted green room, where cast and crew could relax, were created, making backstage life much more comfortable for visiting artists.

A computerised flying system with twelve fly bars was installed to ‘fly’ scenery for performances.

Experts carried out painstaking ceiling and plasterwork repairs (inspired by this 1900 design discovered during the restoration).

New carpeting and seating were fitted throughout the auditorium.

There were major excavations to re-establish the ancient cellar network.

The fitting of an external glass lift greatly improved access to the building. 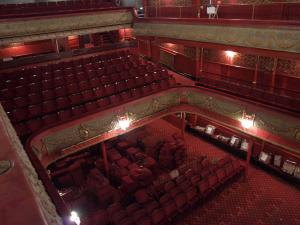 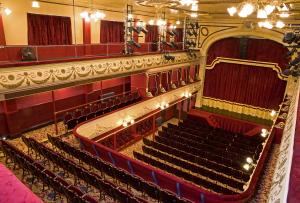 Several management books came to light during the regeneration project that tell us a lot about the acts that performed at The Varieties in the past.

The Management Books are an amazing record of the life of the City Varieties from 1897 to 1902 – a time when music hall was thriving. They record the acts, their ‘business’ (or talent), their salary and any remarks the manager wished to make following their performance. The books record a trapeze artist called Onzalo, who fell on his first night, a comedian who was too drunk to perform and a comedienne who was ‘not worth the money’.

Whilst many acts were marked ‘good’ or ‘fair’, Harry Houdini is described as ‘extra special’ following his performance in 1902.

To mark the regeneration project, a time capsule was buried on the 15 March 2011 towards the end of the restoration.

The contents ranged from programmes and news articles to a genuine fragment of the original stage and a strip of the famous red flock wallpaper.

After being the final act to perform before our venue’s closing, it was fitting that much-loved variety performer Ken Dodd was the first act to perform on the City Varieties stage once it re-opened with a special gala performance on the 17 September 2011.

On Thursday 19 July 2012, The Queen and the Duke of Edinburgh officially reopened The Varieties post-regeneration as part of the Queens Jubilee Tour.

After greeting the crowds that had gathered on Briggate, the couple were treated to a performance by our Youth Theatre – who delighted them with traditional music hall routines, including The Laughing Policeman.

The Queen and Prince Philip are two of only three people to be gifted a plaque on one of our seats, the other being Russell Crowe.

After their visit, Edward Young, the Deputy Private Secretary to The Queen, sent a letter to thank Councillor Adam Ogilvie on behalf of The Queen and The Duke of Edinburgh. It said: ‘It was a true highlight of Her Majesty’s and His Royal Highness’s visit to Leeds, as well as being a wonderful opportunity to meet staff members and to see first-hand a performance of ‘The Good Old Days’ for which the City Varieties Music Hall is so well known.’

The work carried out during the regeneration period has ensured that our glorious venue will continue to delight and entertain the people of Leeds and wider region for many, many more years to come.